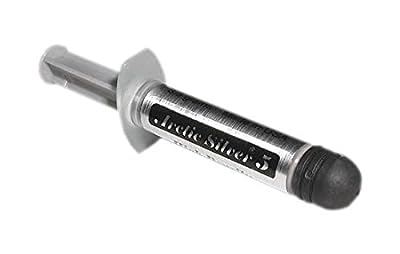 Contains 99.9% pure silver: Arctic Silver 5 uses three unique shapes and sizes of pure silver particles to maximize particle-to-particle contact area and thermal transfer.
Not Electrically Conductive: Arctic Silver 5 was formulated to conduct heat, not electricity.
(While much safer than electrically conductive silver and copper greases, Arctic Silver 5 should be kept away from electrical traces, pins, and leads. While it is not electrically conductive, the compound is very slightly capacitive and could potentially cause problems if it bridges two close-proximity electrical paths.)
Absolute Stability: Arctic Silver 5 will not separate, run, migrate, or bleed.
Performance: 3 to 12 degrees centigrade lower CPU full load core temperatures than standard thermal compounds or thermal pads when measured with a calibrated thermal diode imbedded in the CPU core.
Coverage Area: The 3.5 gram tube contains enough compound to cover at least 15 to 25 small CPU cores, or 6 to 10 large CPU cores, or 2 to 5 heat plates.
Important Reminder: Due to the unique shape and sizes of the particles in Arctic Silver 5's conductive matrix, it will take a up to 200 hours and several thermal cycles to achieve maximum particle to particle thermal conduction and for the heatsink to CPU interface to reach maximum conductivity. (This period will be longer in a system without a fan on the heatsink or with a low speed fan on the heatsink.) On systems measuring actual internal core temperatures via the CPU's internal diode, the measured temperature will often drop 2C to 5C over this "break-in" period. This break-in will occur during the normal use of the computer as long as the computer is turned off from time to time and the interface is allowed to cool to room temperature. Once the break-in is complete, the computer can be left on if desired.